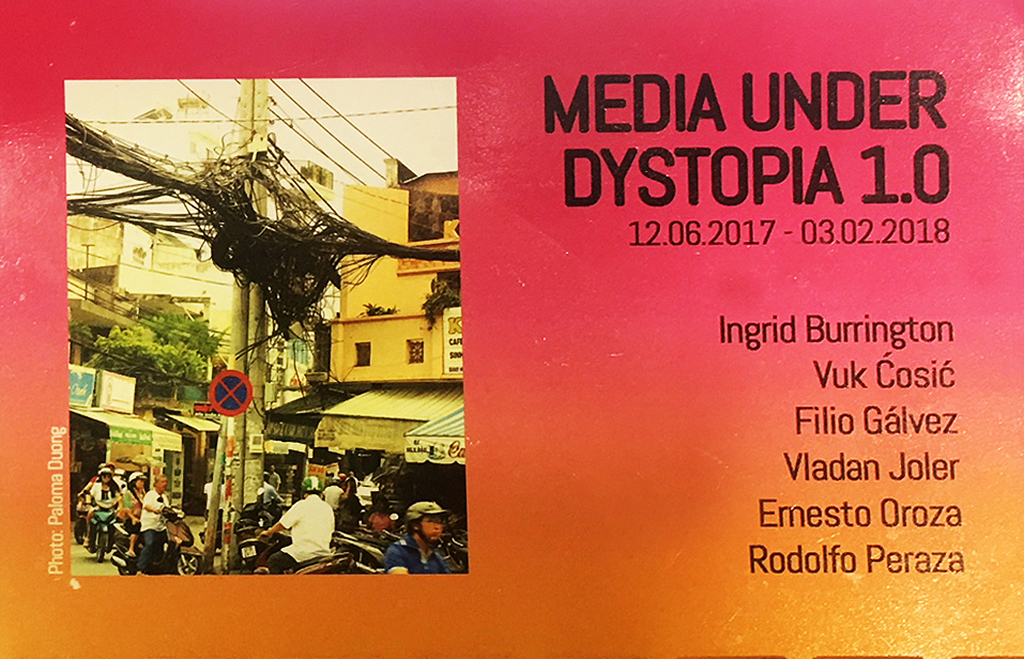 Media Under Dystopia 1.0 delves on the nature of our hyper-connected society and its promise of democracy, at a moment when the core foundations of the World Wide Web are at risk and issues such as Internet Neutrality under attack. How are individuals, as well as local contexts with their specific histories and politics represented and served within the current digital landscape? How can the physical and the digital infrastructures of the Internet be mapped, and what do these new cartographies tell us about today?

As a laboratory of ideas, this exhibition showcases a variety of projects in different stages of completion –from the mere research; to the documentation of interventions; to long-term, process-based works. Many of them are the result of the combination of very specialized, technical and scientific knowledge. This characteristic not only tells of the complexity of the subjects discussed but also of the nature of today’s multidimensional world that very often overlaps with the virtual realm.

Vladan Joler is interested in exploring what he calls the invisible infrastructure of the Internet. Together with a multidisciplinary team that includes experts on Internet forensics and data visualization from the Share Lab –a project he runs in Serbia– he has conducted research on the reach and impact of Facebook’s data collection backbone.

In the show, black and white prints selected from the many digital graphics conforming his study shed light on the potential use and misuse of the 1.6 billion Facebook users’ data (likes, profession, friends, associations, etc.) that the company collects. By combining numbers and facts with methods of investigative journalism and critical media theory, the research reveals potential destinations of this information –in his own words, it “maps how our behavior is transformed into profit.”

Considered the most comprehensive of its kind so far, Joler’s research feeds the discussion on the need for algorithmic transparency – ie. the access and power of decision of Internet users on the governing Internet rules and behaviors. As a professor of New Media at the University of Novi Sad in Serbia, Vladan brings the conversation to an academic setting. This is an opportunity to go beyond the questions of cyber activism, economy and privacy into the social, political and environmental implications of this phenomenon.

Exposing the nature of the abstract processes hidden behind the digital screen, as well as data collection, are also key elements in Rodolfo Peraza’s Guerrilla Hotspot (2017.) In this case though, his research’s outcomes are the source material for immersive experiences in virtual reality.

Guerrilla Hotspot is an installation of free wifi hotspots that has been presented in the Wynwood Design District in Miami, in Los Angeles, and in San Juan, PR. before, and is now active at MUD Foundation to serve the Little Havana neighborhood where it is located. The artist provides these local communities (the immediate radius of people around the nanostations) with access to free Internet, in exchange for collecting the metadata they generate when using it –given their previous consent. The information collected is analyzed and then projected in the space, in real time. The tracking technology –the same that Internet Service Providers use – is hooked up to a VR software for data visualization. The information is converted into abstract maps of connections that, as it happens everyday with the information we give to Internet companies, could be overseen and, judging by the beauty of its graphics, remain at the level of the retina. Anyhow, the immediacy of the piece, which hopefully can be grasped by a fragment of the wifi users within the community, reveals the dynamics of connectivity and surveillance nowadays.

The conversations that the above mentioned works bring to the table have especial significance in the Miami context because this city hosts one of the biggest Data Centers worldwide. A subsidiary of Verizon Communications, this company silently controls the 90% of Internet traffic between the US and Latin America, thus making Miami a capital of Internet connectivity, as relevant for the digital world as its gardens and beaches are for tourism.

So close to Florida, the island of Cuba is, paradoxically, at the opposite end of hyper-connectivity. With a very controlled Internet access and with an increasing number of computer engineers and other technology experts, people in that country has managed to interconnect their home computers to create an underground network popularly called “Street Network” (SNET.) This intranet is a platform for gaming and for sharing information extracted from Internet, offline.

With the help of a local node administrator of SNET in Havana, Ernesto Oroza intervened this network with a piece titled Si despierta un pájaro intercambian sus cabezas los jugadores (2015) –which roughly translates into “if a bird wakes up, the players exchange their heads.” It is a quote from the poem Cielos del Sabbat (1960) by Cuban Writer and poet José Lezama Lima written using the exquisite corpse method. The artist inserted a link in SNET’s opening page to a program stored in its server. For a week, it directed users to another page where they could join an exquisite corpse poem game. Players were prompted to come up with one or two words that would add to the poem. This random and anonymous process was not only reflective of the nature of the network but also of the experience of collectiveness in Cuba. On the other hand, in a context where collective statements are only issued by official institutions, the piece symbolically became an alternative platform for freedom of expression.

The resulting poem was physically brought to the States and printed fragments of it are given away in the gallery for people in Miami to take home in an inverse process to that of the “mulas” (mules) who, surpassing the strict commercial regulations of the two countries, manage enter goods from Miami to the Island; another example of the alternative creativity of the Cubans.

An antecedent of this idea of a digital exquisite corpse is The World’s First Collaborative Sentence (1994,) a work by American artist Douglas Davis. Amazed by the incipient possibilities of the Internet of the time, that artist thought to engage people from all around the world in what came to be a very long, international sentence. With that work in mind, we realize that “Si despierta un pájaro…” brings the Cubans’ intranet experience very close to that in America twenty years ago while, at the same time, it is a comment on the dynamics of those places that, despite their geography, fall out of the speedy highways of the World Wide Web today.

From a similar anthropologic perspective and also inspired by the Cuban resourcefulness, Vuk Ćosić conceived an Invisible Museum of Slavery (2015.) This work has not been realized yet and is presented through a series of documents, from images to text. The idea for the project was born when Ćosić was in an artist residency in Santiago de Cuba, Cuba. His host was a French coffee company who was refurbishing an 18th-century coffee plantation. As with many other buildings in Cuba, this historic site was being converted into a touristic destination and thus its memory of slavery was being overwritten by the nostalgic exaltation of the ruins. “Very quickly, it became obvious to me that Cuba has not found the way to deal with its history of slavery and that current social relations are marked by deeply-rooted resentment,” reflected the artist.

Given the lack of Internet, especially in isolated areas off the capital, and inspired by projects like SNET, the artist thought to set up a local router connected to a hard drive, as an intranet hotspot, containing “every available documentary, movie and book about slavery.” In this way, people who visited the area and connected to it would be able to consume more than its landscape and architecture. The very presence of a digital data archive on slavery twisted the new concept of that space into a memorial site.

The GIS (Google Image Search) (2017) Series by Miami-based artist Filio Gálvez is the result of his experiments with the bandwidth of his Internet connection, which affects the speed and efficiency with which content reaches the screen. Gálvez slows down the strength of his wifi signal to search for images that relate to certain words or phrases of conflicting meaning (for instance, words extracted from the social media, in contraposition to others which were fashionable a long time ago). As images delay in loading, colorful squares with different patterns replace them temporarily. Gálvez captures them through screenshots to later reproduce them individually, at a larger scale, in different mediums that go from paintings to prints. With this action, he is not only sublimating the glitches of the network, but also presenting to us another form of (aesthetic) perception of the digital content.

This series is reminiscent of the experiments by net artist pioneers –from Kenneth Knowlton and Leon Harmon in the sixties to the Vuk Ćosić of the nineties– who looked at the computer code, especially ASCII, not as an intermediary between the machine and the user, but as an element intrinsic of the medium itself, with its own beauty and its potential for communicating. As these artists thought to convey images through text, Gálvez turns the abstract concepts words represent, into images, as in a new pictogram system.

With very innovative resources and different voices, these artists bring us closer to the still-foreign reality behind the slick and sophisticated lights of our screens. They remind us how crucial it is to advocate for a responsible use of that great (and scary) invention of all times, The Internet.

Published in the flyer of the exhibition: Media Under Dystopia 1.0.  December 6, 2017 – March 2, 2018. MUD Foundation. Curated by Rodolfo Peraza and Yuneikys Villalonga.